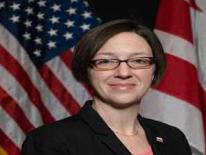 Melisa Byrd is the Senior Deputy Director / Medicaid Director of the Department of Health Care Finance (DHCF). In this role, Ms. Byrd serves as the principal manager for the District’s Medicaid, CHIP, Alliance and Immigrant Children’s programs. Melisa directs the day-to-day organization, planning, implementation, and evaluation of the programs to ensure compliance with federal and District laws. Melisa advises the DHCF Director on all major policy and budget issues related to DHCF’s health care programs. Previously, Ms. Byrd served as the agency’s Chief of Staff and as the Associate Director of the Office of the Public Provider Liaison.

Prior to returning to the Department as the Medicaid Director in October 2018, Ms. Byrd was a Senior Consultant with Health Management Associates (HMA) where she consulted with public and private entities across the nation on Medicaid, health care reform, and reproductive health.

Before initially joining DC Medicaid in 2008, Melisa served as Policy Advisor to the Secretary of the Louisiana Department of Health. Melisa led the Department’s efforts to expand health insurance coverage to uninsured adults and worked on the state’s efforts to restore and redesign the health care delivery system in the aftermath of Hurricanes Katrina and Rita. Melisa began her career at the National Governors Association in Washington, DC, where she was a policy analyst in the Health Division of the Center for Best Practices.

Ms. Byrd received her Bachelor of Arts in Government from Wofford College in 2000.