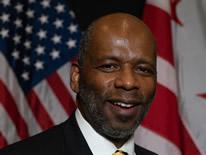 The Office of the Deputy Mayor for Health and Human Services (DMHHS) supports the Mayor in coordinating a comprehensive system of benefits, goods and services across multiple agencies to ensure that children, youth, and adults, with and without disabilities, can lead healthy, meaningful and productive lives.

As Director of the Department of Health Care Finance (DHCF), Mr. Turnage serves as the manager of the agency and the chief advocate for the annual legislative and agency budget priorities. He works closely with the Mayor’s office and City Council to address the concerns of Medicaid stakeholders and the citizens of the District.  Director Turnage was reappointed to the position by Mayor Bowser in January 2015.  Since his initial appointment in 2011, Director Turnage has spearheaded efforts to reform several of DHCF’s major provider reimbursement systems, established a program of accountability for the agency’s redesigned managed care program, and, more recently, organized and oversaw the implementation of a plan to reduce fraud in the Medicaid home care program – reducing those costs by nearly $11 million per month.
Prior to this appointment, Mr. Turnage served as the Chief of Staff at Virginia Commonwealth University. Director Turnage accepted this position after serving in the cabinet of two Virginia Governors. He served as Chief of Staff to Governor Timothy M. Kaine and served in dual positions for Governor Mark Warner as Director of Policy and Research at the Virginia Department of Medical Assistance Services and Advisor for Special Projects from 2004 to 2006.
Director Turnage served as the Deputy Secretary of Health and Human Resources from 2002 to 2004 under Governor Mark Warner and as a researcher for both public and private organizations from 1985 to 2002. As the principal analyst at the Virginia Joint Legislative Audit and Review Commission, he authored more than 15 studies.
His work includes studies of health care and public safety. Some of the topics addressed in these studies include the adequacy of Virginia’s Medicaid hospital reimbursement system, the use of Medicaid asset transfers and estate recovery, and the financing of Medicaid long-term care services. While working in the Governor’s Cabinet, Director Turnage authored a study on funding the mission-related activities of Virginia’s Academic Health Centers. The National Legislative Program Evaluation Society selected two of Turnage's studies for excellence in research methods awards.
Wayne Turnage is a graduate of Ohio State University (Master of Public Administration, 1982) and North Carolina A&T State University (B.S., 1980).
Twitter
Facebook
Mobile
Maps
Webcasts
RSS
Data
Subscribe
END_OF_DOCUMENT_TOKEN_TO_BE_REPLACED